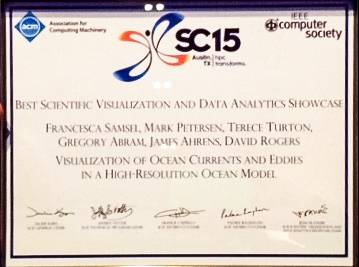 ‘Visualization of Ocean Currents and Eddies in a High-Resolution Global Ocean-Climate Model‘ was awarded ‘Best Scientific Visualization & Data Analytics Showcase‘ at Supercomputing 2015 in Austin, Texas. The showcase was based upon work supported by Dr. Lucy Nowell of the U.S. Department of Energy Office of Science, Advanced Scientific Computing Research under Award Numbers DE-SC-0012516 and released under LA-UR-15-20105. The MPAS-Ocean model is developed at Los Alamos National Laboratory by the Climate, Ocean, and Sea Ice Model team (COSIM). Core MPAS-Ocean developers include Mark Petersen, Todd Ringler, and Douglas Jacobsen. MPAS-Ocean is a component of the Accelerated Climate Model for Energy (ACME). MPAS-Ocean and ACME are supported by Dr. Dorothy Koch of the U.S. Department of Energy Office of Science, Earth Modeling Program of the Office of Biological and Environmental Research. Additionally, the authors would like to thank David Astrada for his videography expertise and the Bradbury Science Museum for their generous sharing of facilities and support.

Gallery from the award presentation.