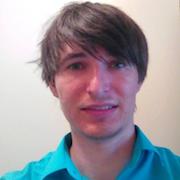 Christopher M. Biwer is a Ph.D. candidate in the Physics Department at Syracuse University. He has been an active member of the Laser Interferometer Gravitational-wave Observatory (LIGO) collaboration since 2012 and his dissertation is focused on searching for gravitational waves from merging black holes. He is one of the primary developers of the search for compact-object mergers that detected two binary black hole mergers in Advanced LIGO’s first observing run. He has also developed a toolkit for estimating the model parameters of binary neutron star and black hole mergers signals. This parameter estimation toolkit is being used to understand the possible astrophysical implications of future Advanced LIGO detections. During 2015 and 2016, he was a LIGO Fellow at the LIGO-Hanford Observatory where he developed the automation software for simulating the detectors’ response to astrophysical signals. This system is now used for data quality investigations. Chris holds a B.S. in Applied Mathematics and Physics from the University of Wisconsin-Milwaukee.