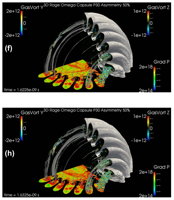 In this paper Bob Kares describe some numerical experiments performed using the ParaView/Catalyst in-situ visualization infrastructure deployed in the Los Alamos RAGE radiation-hydrodynamics code to produce images from a running large scale 3D ICF simulation on the Cielo supercomputer at Los Alamos. The detailed procedures for the creation of the visualizations using ParaView/Catalyst are discussed and several images sequences from the ICF simulation problem produced with the in-situ method are presented. His impressions and conclusions concerning the use of the in-situ visualization method in RAGE are discussed.