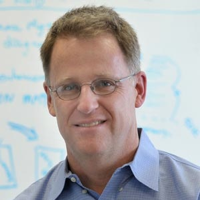 Ian Foster visited the Data Science at Scale School on September 18 and presented ‘Distributed Scientific Computing – The Acceleration of Discovery in a Networked World‘ as a Director’s Unclassified Colloquium at 1:10PM in the Physics Auditorium. Ian Foster is Director of the Computation Institute, a joint institute of the University of Chicago and Argonne National Laboratory. He is also an Argonne Senior Scientist and Distinguished Fellow and the Arthur Holly Compton Distinguished Service Professor of Computer Science. Ian received a BSc (Hons I) degree from the University of Canterbury, New Zealand, and a PhD from Imperial College, United Kingdom, both in computer science. His research deals with distributed, parallel, and data-intensive computing technologies, and innovative applications of those technologies to scientific problems in such domains as climate change and biomedicine. Methods and software developed under his leadership underpin many large national and international cyberinfrastructures. Dr. Foster is a fellow of the American Association for the Advancement of Science, the Association for Computing Machinery, and the British Computer Society. His awards include the Global Information Infrastructure (GII) Next Generation award, the British Computer Society’s Lovelace Medal, R&D Magazine’s Innovator of the Year, and an honorary doctorate from the University of Canterbury, New Zealand. He was a co-founder of Univa UD, Inc., a company established to deliver grid and cloud computing solutions.