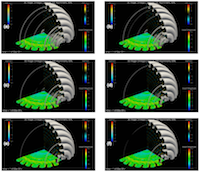 In a previous paper Robert Kares described some numerical experiments performed using the ParaView/Catalyst in-situ visualization infrastructure deployed in the Los Alamos RAGE radiation-hydrodynamics code to produce images from a running large scale 3D ICF simulation. One challenge of the in-situ approach apparent in these experiments was the difficulty of choosing parameters likes isosurface values for the visualizations to be produced from the running simulation without the benefit of prior knowledge of the simulation results and the resultant cost of recomputing in-situ generated images when parameters are chosen sub-optimally. A proposed method of addressing this difficulty is to simply render multiple images at runtime with a range of possible parameter values to produce a large database of images and to provide the user with a tool for managing the resulting database of imagery. Recently, ParaView Catalyst has been extended to include such a capability via the so-called Cinema framework. Here Kares describes some initial experiments with the first delivery of Cinema and make some recommendations for future extensions of Cinema’s capabilities.