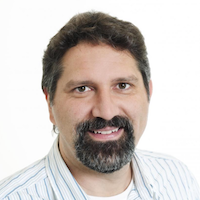 Torsten Moeller is a professor at the University of Vienna, Austria, since 2013. Between 1999 and 2012 he served as a Computing Science faculty member at Simon Fraser University, Canada. He received his PhD in Computer and Information Science from Ohio State University in 1999 and a Vordiplom (BSc) in mathematical computer science from Humboldt University of Berlin, Germany. He is a senior member of IEEE and ACM, and a member of Eurographics. His research interests include algorithms and tools for analyzing and displaying data with principles rooted in computer graphics, image processing, visualization and human-computer interaction. He heads the research group of Visualization and Data Analysis. He served as the appointed Vice Chair for Publications of the IEEE Visualization and Graphics Technical Committee (VGTC) between 2003 and 2012. He has served on a number of program committees and has been papers co-chair for IEEE Visualization, EuroVis, Graphics Interface, and the Workshop on Volume Graphics as well as the Visualization track of the 2007 International Symposium on Visual Computing. He has also co-organized the 2004 Workshop on Mathematical Foundations of Scientific Visualization, Computer Graphics, and Massive Data Exploration as well as the 2010 Workshop on Sampling and Reconstruction: Applications and Advances at the Banff International Research Station, Canada. He is a co-founding chair of the Symposium on Biological Data Visualization (BioVis). In 2010, he was the recipient of the NSERC DAS award. He received best paper awards from IEEE Conference on Visualization (1997), Symposium on Geometry Processing (2008), and EuroVis (2010), as well as two second best paper awards from EuroVis (2009, 2012).